My parents will like this, they introduced me to Budvar Budweiser a few years back as their wine club used to sell it.

Scenario, im sat on Facebook messing about when I notice a link on the right "Become a Budvar Budweiser beer taster!"... I think "what the heck" jump to the Budvar Facebook page and sign up.

I dont really think to much more about it until one day I get an email confirming that I, along with 199 other people, had been chosen from the thousands of people who signed up to become a beer taster !.

What did this entail ?!... well... they posted me 8 bottles of (free) beer, x4 Budvar Budweiser and x4 Anheuser-Busch Budweiser !.... instructions were, chill, drink and complete a quick on line survey !.

This I have done, and I must admit the Budvar Budweiser is much nicer, the proof is in the picture, still got x2 bottles of the other Bud not opened !.

Now, I am in the running with the other 199 beer tasters to win an all expenses paid weekend trip for me +1 to the Budvar brewery... now that would just be the icing on the cake :-) 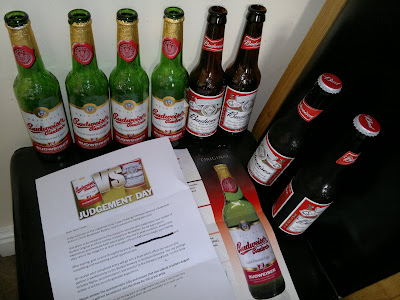 I never won the trip lol... ohh well, was still good fun doing this :-) Thanks Budvar !