At the start of 2008 Bumble and Jade qualified for the "Chiltern & Thames Rider Competition" at Herts County Showground.

Today was that competition day, and also the final ever show that the pair will enter together.

However, getting a 1st in "First Ridden" and "Pony Club Pony" at a local show in Berkshire is one thing ... its another thing getting a 1st up against the best pony's from around the South UK!.

Over all they came 8th out of 12 in First Ridden and last out of 11 in Pony Club Pony.

But you have to remember Bumble was a riding school reject, and brought to teach Jade how to ride stubborn and lazy ponys.... and also by being calmer Bumble is very safe... the last thing we wanted (and still don't want) is a head strong, forward going "fizzy" Pony.

So in that respect Bumble has excelled in every way, and she and Jade have won many rosettes and trophies.... it's little wonder we got approached by someone to take her off our hands (on loan for her young daughter, who have already got a 1st in lead reign jumping!).

Now it's team Tizzy and Jade ... they have started jump training, and as we head into 2009 Jade will stop gymnastics and step up her training during the winter .... then they will hit the show scene in force starting in the spring.

I am absolutely positive they will qualify for Chiltern & Thames again (just look at Tizzy jumping further down this blog !) ... and this time i'm sure they will place in the top half of the entries (I wont go so far to say top... I have seen some very very good (read "expensive") ponys !). 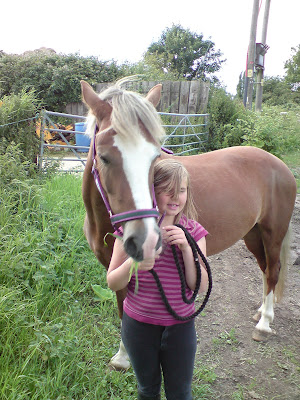