... actually... it made a change from staying in my room all day !... and although cloudy it didn't rain which was a bonus !.

Pictures of the day will have to be posted up later as they are on another camera.

Now... considering im in India and the chap speaks no English im pretty impressed !, he then reads my fortune. In a nut shell im coming to the end of 8 years of tough times and things will be better for me in future. He says my Wife will be supportive of me over an issue in the next few months, I will do more travel in 2008 and learn more things... and that I will live to be at least 89.....

Up to the point about living to at least 89 I was quiet happy that yes, it was all true, but my liver does not believe it can keep going for that long !. :-0

Also, during the day I had a couple of sweet coconuts... they sell them at the roadside ... for 10Rps (a few pence) a chap chops open a green coconut and you drink the juice from it ... very tasty!, afterwards they open them up... and inside is the smallest amount of flesh to eat... its like concentrated coconut ... very nice, and much better than the brown coconuts we get in the UK. 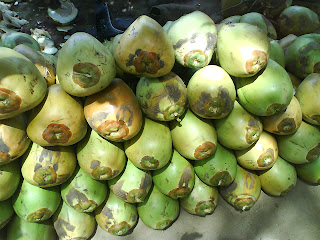 Early afternoon we stopped for the traditional Chennai lunch in a hotel... mutton soup... very nice, then three different chicken dishes; again all very nice, but one, butter chicken... OMG heart attack city !.... it was like someone had melted 5 bars of Lurpack in a pan and sprinkled in some red food colouring and chicken as an after thought !... I mopped some chicken and juice with my Roti... very rich, you could not have eaten too much.

I then went to the toilet before heading into town to look at jewellery.... I took one look at the toilet and decided to risk holding in my number 2 for later !...

Now, im no expert at the cost of jewellery, and what is a good price.. I just go on what something looks like... I have always wanted a silver necklace and saw a nice 4oz solid silver one in a shop, but it did not have a price... do you know why?... its because they weigh the jewelry and charge you the current bullion price... weird or what ! .... the necklace was £28, and a design I have not seen before... so I thought "what the hell" and treated myself... turns out to be a bargain, a bulk standard 4oz sterling silver curb chain in Argos is £90.

Also, my chain is pure silver, not sterling silver (which contains copper to make it harder) so as a Pro its worth more, as a Con its softer and more liable to damage and will tarnish quicker and requires special cleaning.

I then looked at engagement rings again (after my shock last weekend at the cost of these things I was dead scared at looking again!) but with my mate from work and a more relaxed environment I took the plunge.... everything is 22crt gold and the diamonds are all guaranteed quality ... again, to get the price, the weight of gold is calculated, followed by the diamond grade and carat weight, et voila you have your ring price.

During this time my number 2 was knocking at the door to be let out... so, I look around, the shop is modern and full of well to do people.... I ask to use the toilets.... I walk in "Gahhhhh" its like at the Hotel I had lunch in !...

Im greeted by a hole in the floor to squat over.... to the left is a tap from which you poor water onto you hand and wipe your bum neat... yep ... no toilet paper in sight ... and yes.... the smell was worse than anything ive encountered in France !. My Number 2 took pity on me and retreated !.

At this point I thanked Diwakar for the day, dropped him off and headed back to the Hotel.... ahhh the relief of a clean, real, toilet with soft toilet paper.... :-)

Just eaten a banana and had two cans of Red Bull for dinner... i'll watch the Fantastic Four on TV tonight then hit the sack...

I'm curious to know if the Indian word for 'issue' is similar to the word for 'impotence' :-)

Just when he predicted that your wife would be supportive during your 'issue' ;-p